Often when I find myself working on big projects, I like to paint something simple on the side. This helps me in several ways: First, it makes me not be so intensely focused on one figure, letting my perfectionism getting the best of me. Second, it makes for a nice change in view, simply staring at the same figure for several months can get a little boring. Third, by putting away a project, it gives me some room for new inspiration and improving that project. And probably there are many more reasons why a small side project works well for me.

This figure started as such a small side project. I picked this miniature, as the sculpt is relatively simple but very strong and clean. I could get it started without much prep. There are only a minimal number of parts, so hardly any subassembly was required. Also, as the figure is so well known, I did not have to think about a colour scheme. I could simply follow a colour scheme that was already designed so perfectly well.

But, as you can probably tell. This figure turned out to be more than a small side project. When painting it, I just got so inspired to invest more effort in it. I saw opportunities for nice plays in colours and contrasts, and of course I did not want to skip on the treat of painting another freehand. 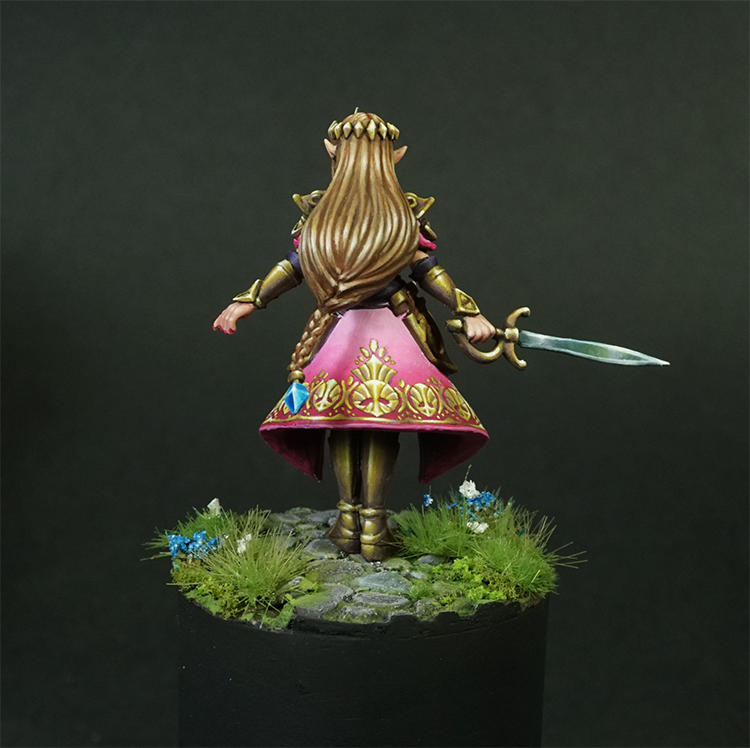 So in the end, I just settled with what felt natural to me, and let myself be led by the figure. This was such a great figure to paint. Even though I spend a lot more effort than I originally intended, I truly enjoyed every minute of it.

As I did not intend on creating a large showbase, I was a little stuck when thinking about a base for this lady. In the end, I settled with something simple. I was already working on another large base, and as you may know I am not a huge fan of base-building, so that was enough for the time being. I decided to go for a simple cobblestone path, some grassy Hyrulian fields, with of course some typical blue and white flowers.